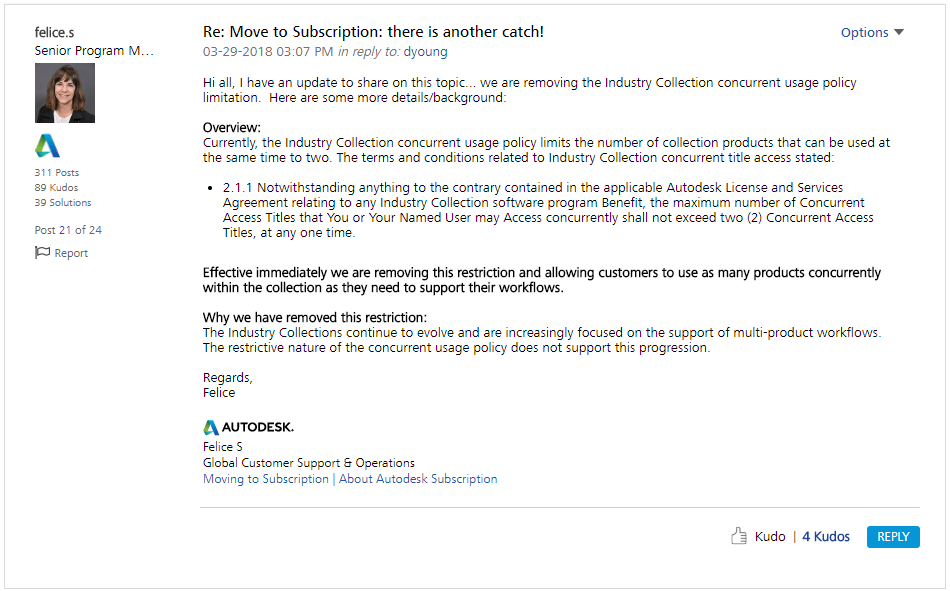 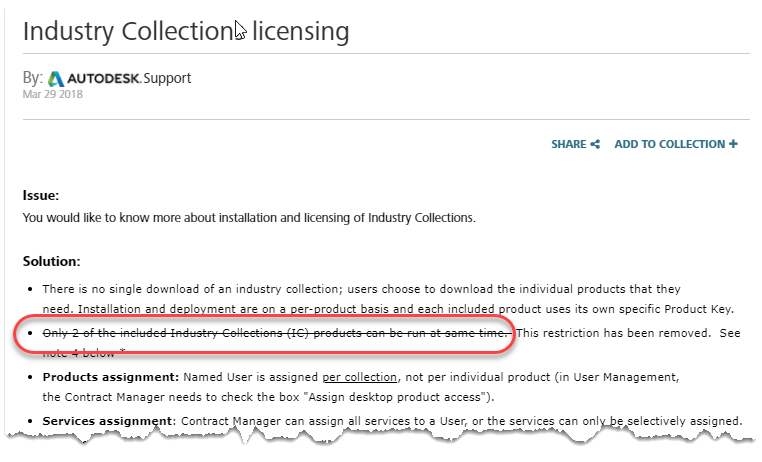 It’s no secret that Autodesk is moving to an annual subscription model. There’s a number of reasons Autodesk tells you it’s for the flexibility and benefit of the customers. Some of these benefits include…

All these benefits are true, legitimate reasons a customer would want to move to a subscription model. If you look at the current pricing promotions, converting existing licenses to the Industry Collections looks very financially attractive.

A number of years go, Adobe rolled out subscription licensing. Revenue suffered for a couple years and then rebounded. Customers were no longer making large upfront purchases but as time went by and subscriptions increased, revenue rebounded and higher profits ensued. And because revenue wasn’t tied to an annual “release” cycle of software updates, it’s a more predictable and stable revenue stream. It’s no wonder Autodesk is following in Adobe’s footprints. As a business, they’d be foolish not to and even as a customer, I don’t begrudge them to make a profit and give them more flexibility in running their company.

When Adobe made the transition, revenue was significantly impacted and returned in a couple years. Autodesk is seeing the same thing with one key difference. Autodesk has underwent 11 straight quarters of losses. Adobe never lost money. Clearly, Autodesk’s customer base isn’t as understanding and you see a lot of public facing criticism in public forums against being forced into this model.

Part of the problem is the longevity of the data Autodesk customers produce compared to Adobe. Autodesk customers often maintain engineering or product documentation for decades. That pretty marketing graphic made from Adobe products likely isn’t managing product or building data 2 decades later.

The other part is Autodesk’s horrible track record with pricing. Autodesk isn’t a software company, they’re a sales organization and they’re very good at it. They have a history of squeezing the re-seller channel, taking over their major accounts and competing with their third party partners.

If you look at the various changes has made over the last 2 decades, rolling out maintenance subscriptions and finally making them mandatory to replace upgrade charges or rolling their new annual subscription model, you’ll notice a common theme. All of these changes create an “Artificial Crisis” for customers which results in collecting as much as they can while delivering as little as possible,  Given their track record of deceptive and misleading sales, it’s no wonder customers have a lack on trust and are resisting these changes.

What Should You Do

Customers like to think they have control. Autodesk likes them to think that as well. But the fact is, you don’t. I hear a lot of talk from customers about maintaining their existing perpetual licenses and resisting the move to subscription, Personally, I think that’s misplaced.

Autodesk wants you on subscription and that’s where you’ll go, sooner or later. You don’t have a choice without switching software, Want to Upgrade, Downgrade, Cross-grade to another product, move from Standalone to Network Licensing, you’ll have to go on subscription. Unless you don’t want to pay more annually to maintain your perpetual licenses than it would to go to subscription, you’ll move…sooner or later.

Willing to stick it out? Feel free but in industries like construction that are really evolving with new technology workflows and require all team members to be on the same page to leverage collaborative project workflows it’ll be tough to do. Even with the evolution of technology to the cloud and big data analytics, other industries are going to be hard pressed to not upgrade. How many people do you know running AutoCAD r14 or even 2008 for that matter?

Still not convinced and plan on hanging onto your perpetual licenses forever? Good luck. That “Navisworks Manage” you have you’re free to run forever as long as you can find the hardware that will run it. In fact, you can’t even buy a maintenance subscription anymore because we at Autodesk stopped making it. You’re welcome to buy a subscription to our new “Navis Quantum” anytime however,

If you’re really dead set on maximizing that initial investment you paid for your perpetual licenses, you really have only one option…stop paining maintenance subscription now. Ride it out a couple years and buy subscriptions when you need them. They’ll be running a promotion sooner or later. With a fiscal year end of January, the new years is always a good time to negotiate pricing.

So let’s just assume you’re on annual subscriptions down the road. What can you expect next?

Because you can add/drop licenses easily with annual subscriptions, they’re easy to scale with your business. When business is good, so is Autodesk. But what if there’s another recession and people start dropping licenses?

While most resellers and Autodesk are promoting Industry Collections, there’s a little know catch that every contact I asked either in the reseller channel or at Autodesk didn’t know (and I asked many). The Industry Collections limit you to running 2 concurrent products for the same user on the same computer. If you’re in the Mechanical Electrical and Plumbing construction industry, it’s common to run AutoCAD, with CADmep (runs in AutoCAD) and Navisworks at the same time…maybe ever Revit too.

You literally can’t find information on the FAQ’s regarding this restriction and the sales people are telling you that you can drop your Navis and CADmep licenses and migrate your Revit/Acad to an AEC Collection and save money and licenses without disclosing this restriction.

Or in a single Discussion group post by Autodesk…

It’s not found in the other countless pages and links your most often referred to. Reading closely, you’ll notice, one talks about the restriction generically and the other only pertaining to network versions. Autodesk re-sellers don’t have access to Collection licenses (only individual products) and can’t even test. So hows this work and how does it apply?

Upon much research by myself, my industry colleagues and Autodesk, come to find out it’s not a “technical” limitation rather a “policy” that’s not enforced with technology. So, what happens if/when…

As you can see, Autodesk is in complete control and your only option once on subscription is to pay or or stop using the software. There is no longer a perpetual license to fall back on.

Ok, fine, you can just buy an extra Navis or Revit subscription. But those need to be assigned to a specific user who also has access via the Collection. Or if you’re preference is network licensing, forget it. Revit and Navis are no longer able to be purchased with network licensing unless on a subscription.

If you don’t think it’ll happen, think again. For the second time in just a few short months, Collaboration for Revit isn’t enforcing licensing. The first time this happened, when they turned it on many users were left without access to their projects and unable to work. They should have had licenses, true but C4R configuration and setup is not straight forward. It’s common to grant access to people in a project. They may not realize you also need a license provisioned in another system. In fact, it’s very easy to have multiple licenses assigned to the same user from different companies essentially giving Autodesk double revenue and you’ll never know.

Given their misleading tactics in the past, how do you know this disabling of license checking isn’t intentional in an effort to get people to start using and depending on the software only to force a purchase down the road? It’s well known that AutoCAD was as popular as it was due to the easy of piracy back in it’s infancy.

So in summary, there’s really only a few practical options,..